Maya Jupiter is a Mexican born artist/host that has two separate stories of starting life over in another country. Maya was born in LaPaz, Mexico and moved over to Sydney, at the age of one. Her parents had decided on the move to create greater opportunities for their children. Growing up in the Inner West suburbs of Sydney she fell in love with Hip Hop and “the rest is history”. Maya worked as a presenter and host of Channel V’s Soul Kitchen and Triple J’s Hip Hop Show.  In 2008 she moved over to Los Angeles to pursue her career in music.

Aimee and I had already discussed how great it would be to interview her. Growing up we both had the same experience and spoke about how she was the only Latinx Person on Australian TV. We both felt like there was a familiar face on TV, but we had never met her before.

Maya Jupiter is an artist that creates messages in the hope that it will bring on positive social change. A self-declared Artivist, who co-founded Artivist Entertainment, an entertainment company with the same ideals as the motivation for their work.  She writes music about social issues that are important and current. This is done with an authenticity that is true to herself as she pulls inspiration from both her cultures to create beats and bars.

What is of particular interest to me are her two stories of migration. I’d like to know how it differs from being Latinx in Los Angeles to being Latinx in Sydney, Australia. I often think about this the contrast of these two worlds. If our Visa applications to the United States came back earlier, what would my life be like? Would I be more in touch with my Latin side? Would I be able to dance Salsa better?

I didn’t want to miss out on a chance to ask MC Maya Jupiter anything so from Hip Hop music, her early beginnings and the unfortunate subject of Donald Trump we went.

Your mother is Turkish, your father is Mexican and you’re Mexican born. When migrating to Australia, was there a part of your background you felt closer to?
I think having a Turkish Mother and having access to the Turkish community I always felt close to that culture but I was always more interested in my Mexican heritage. Probably because I didn’t know any Mexicans, didn’t have any community and felt very distant from it, so it was something that I wanted to learn more about.

Did you find it difficult to identify yourself?
No, I have always been very comfortable being me as it’s all I’ve ever known, like ‘doesn’t everyone have parents who speak three languages?!’. I always felt like an ‘other’ in so many ways. I also grew up in the Bahai faith which many people didn’t know about in school so everything was ‘other’ for me, which was normal.

How do you stay connected with your Turkish Side?
My Mother has always been quite involved with the Turkish Community in Auburn so I would be connected through her.

Did you grow up speaking Spanish?
No, unfortunately, my older sister had a kindergarten teacher who told my parents not to speak to us in Spanish. My sister was 4 when she came to Australia, she was understanding English but speaking back to the teacher in Spanish. Her teacher thought she was confused. So my parents decided to give me English as a first language and I never got around to learning Spanish. It’s a shame because we now know that kids work it out in a few years and are quite capable of learning 3 or 4 languages at the same time.

When did you first discover your connection to music and in particular Hip Hop?
I have always loved music, my connection probably came as a toddler. I remember taking Michael Jackson’s Thriller Tape to Primary School. I fell in love with Hip Hop around the age of 14. I started writing my own raps and the rest is history! 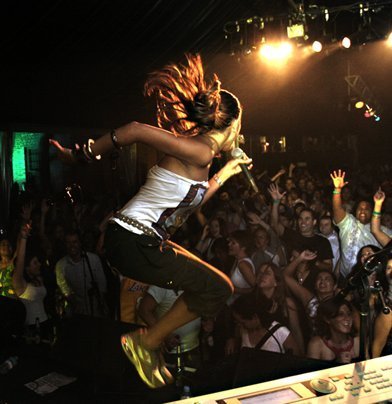 How has your Mexican and Turkish background influenced the way you make music and art?
I have always connected with my culture through Hip Hop. It is a way to truly represent who I am and all of my influences. I would add some Spanish words, sample Salsa music, have Mexican Son Jarocho Harp played on the tracks. Lately, I have really dived into using instruments for the Son Jarocho tradition as well as sampling my Turkish Great-Aunt’s music from the 70’s.

I remember growing up and watching you on TV, it was the first time I’d ever seen a person from the Latinx Community on Australian Television and on top of that you were also female. Did this thought ever come into your mind when you were entering the industry?
100% I grew up looking at Dolly magazines and would think about entering their modelling competition, and every year it would be the same blue-eyed blonde surfer girl who won! And I’d think to myself that it wasn’t meant for me, or I wasn’t pretty enough or good enough. I felt like an outsider flicking through the magazine. Also, it didn’t represent my experience at all, growing up in Western Sydney and the Inner West. So when Ben Richardson at Channel V gave me a chance to be on the air, I jumped at it! I wanted to represent Aussie Hip Hop as well as all the diverse ethnicities that Australia is. It was a really big deal for me too!

Did you experience any prejudices?
All the time. I was in Year 1 and I remember being asked: ‘Where were you born?’, ‘Go back to your own country’. If they weren’t calling me a wog then they were calling me derogatory names for Aboriginal. All kinds of stuff.  Then in high school, we had a high percentage of Greeks, and on my first day of Year 8 at my new school, a boy told me he hated half of me. I was totally unaware of why, until my Mother had to give me a history lesson.

Later on, after the Cronulla riots, I was at the Big Day Out. I had finished a very long day of filming for Channel V watching a band in the crowd and some guy with a giant flag yelled at me and told me to F Off. It was actually scary because I see the rage in his eyes.

These are small incidents of racism, I can’t really recall any times of I have faced prejudice in the workplace, if it’s happened I have been unaware.

You moved over to Los Angeles in 2008? What was the reason for this move?
Yes, I did. I wanted to make the album I had never made and I wanted to work with Chicanos to do it. I had also fallen in love and I was going to see where the relationship was going. We are now married with two kids.

There’s a large Mexican community in Los Angeles, definitely a lot more than in Australia. I know that when I go over to the states I automatically feel a bit more connected to my culture. I think it’s because there are more people that look like me and I’m hearing Spanish on the regular. Is that just me or do you feel this way as well?
Absolutely! It’s amazing to be around so many Mexicans and Central Americans. Although I do miss Australian and our cultural landscape also! I realized just how Aussie I am after moving to America. Hearing Spanish everywhere, having access to the food and the community is incredible. I feel like I belong and it’s a feeling I didn’t know I was missing until I experienced it.

Back home in the States, if you are from anywhere in Latin America you are “hermana” (sister) automatically. Here, I have so many Xicana hermanas, it’s amazing. There are so many circles to be a part of to learn ancestral knowledge, music and danza. The opportunities are endless. I feel like I’ve been politicized in a way that I hadn’t been in Sydney also. There are so many community organizers and it’s such a part of people’s everyday life, it’s a really beautiful thing.

With Trump’s election last year there was a huge emotional response from Australians, a lot of those were supportive but some of which were of the mind frame of “Who cares about America, it doesn’t affect us”. Being Australian and living in the United States, could you tell us the reasons why you think it’s important for Australian’s to care?
It absolutely affects Australians and the world. We are experiencing a President without a moral compass. He empowers racists and fascists. It has contributed to many violent crimes and murders. A young girl wearing a hijab was beaten to death, for no reason. It is completely insane. And as much as we think we are far away from it in Australia, we are dominated by American movies, music and culture. So it does affect our psyche. Any racists in Australia who have been controlling themselves suddenly feel like they have permission to come out and spew hate.

I think it has to happen so we can see ourselves for who we are and finally get to the dialogues, which will hopefully bring on the healing. We have so far to go.

Australia uses an American security company for their detention centres for refugees. We absolutely are tied and connected to the American ways of doing things. I hope with all my heart that our healthcare system doesn’t become Americanised because so many lives will be lost if that happens.

You call yourself an Artivist, can you tell us the meaning behind this?
It means Artist / Activist. I don’t know who coined the term but I think it sums up who I am as an artist. Someone who is trying to make positive social change through music.

I can see your Activism through your songs like “Never Said Yes”. A song that was written about sexual assault in colleges, if there’s a message we could take away from this song what would it be?
The message is CONSENT. We need to stop victim blaming and focus on whether or not consent was given. I want people to discuss consent. What does it mean to you? Because at the end of the day we have to define what that is. If there’s no consent, then it is rape, simple.

Your song Madre Tierra is about strong females all around the world. What was it like performing this live at the Women’s March this year?
It was incredible. I had so much fun. It was such a massive day, full of energy and people power. I felt very honoured to share that song with folks. I dedicate it to all the women who’ve lost their lives to violence.

You are now a mother of two, what is the one message you would like to pass down to your children and the youth of today?
You are beautiful, special and you matter. You have the power to change the world. Shine your light, be kind, be generous with your heart and love as hard as you can.

If you could tell your five-year-old self something, what would it be?
You are good enough.